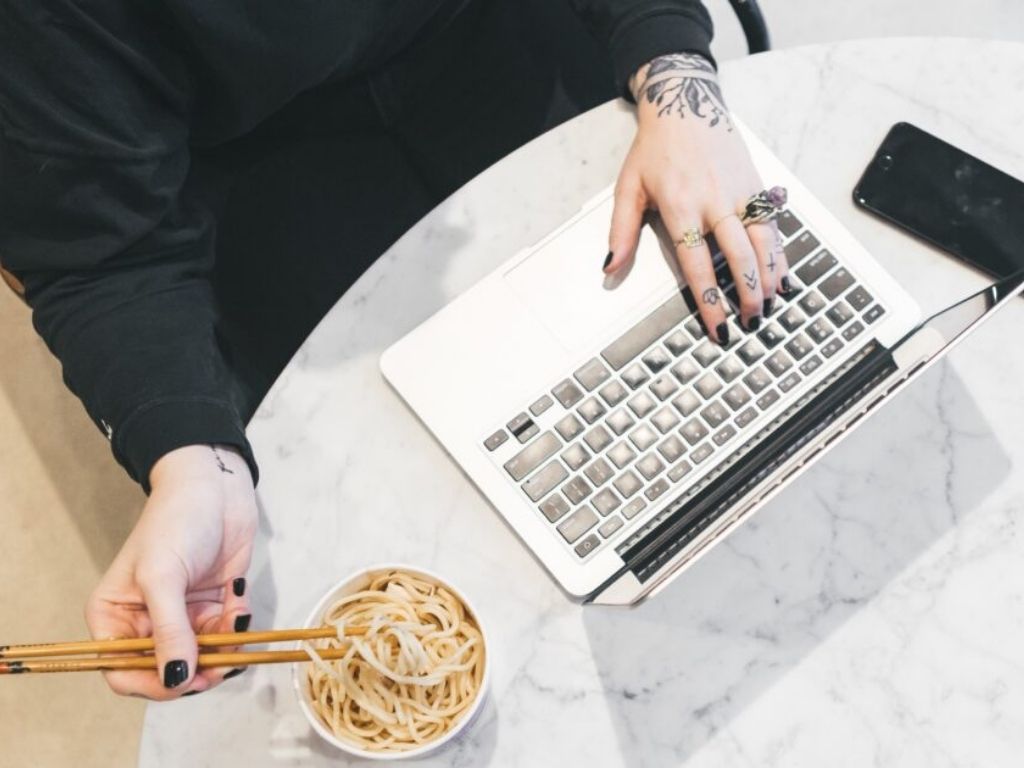 If you were to look back at my journal entries my worst habit was binge eating. All I ever wanted was to stop binging but I let it go on…

How Binge Eating All Started:

My life as a group fitness coach and personal trainer beat me to the ground. Two nights a week I would get off at 8:30 pm after working since 6 am. Other nights it was 7 pm.

My commitment to my daily email list meant that I had to get one email out per day by 9 pm.

I didn’t always prioritize writing emails ahead of time so I would usually do it when I got home from the gym.

The problem was that I was usually so exhausted when I got home from work. I was so run down from the day that I would practically be in tears and nauseous from the lack of sleep. My nausea and cravings would easily be mistaken as hunger.

Where I screwed up:

When I came home I would get heat up dinner, sit on my laptop, write emails, stare at the screen, and shovel bite after bite in my mouth. This became a terrible habit.

Many people eat at their desks all the time. My problem was that I would not pay attention to my fullness cues.

I always had meals on hand from Snap Kitchen. The weird thing was that I would never usually get full after just one (or so I thought). Some nights I would eat two or three meals in one sitting….Sometimes I would eat 1,000 or even 1500 calories in one go while staring at the screen. Keep in mind that this is on top of what I had already been eating all day.

This went on week after week and month after month.

This habit was not only expensive, but it drove me to tears week after week and I ended up putting on a lot of unwanted weight because of it. I did a great job of hiding this weight and my unhappiness.

A binge is a binge:

A lot of people binge eat processed junk foods like candy bars, cake, ice cream but it doesn’t matter what you eat to be considered a binge. It matters how much of one particular food you eat. Whether its one bite more or 50 bites more. If you feel guilty after, it’s a binge.

What was going on for me at this time:

Despite what you may have seen on social media I was terribly unhappy as a trainer at Onnit. It wasn’t all bad! Most of the time I did love what I was doing, but there was a dark side of me that was killing me slowly.

Nothing against the company, or the gym, It was ME that made myself miserable.

It’s embarrassing to admit this but it’s the truth.

I no longer work at the gym. My departure was amicable. I am grateful for everything I learned while working for the company including the nights I spent binge eating or crying myself to sleep.

I can successfully say that I have not binged in months.

How I stopped binge eating:

I needed structure so I created rules for myself that I could commit to with perfection.

My first food rule was that I would NEVER EVER EVER eat in front of a screen again. No iPhone, no computer, no TV, never.

It was important to have this be my one and only rule at first because most of my binges happened late at night, in front of a screen, mindlessly eating.

More rules came along later but stopping eating in front of a screen was a habit I needed to change immediately.

I decided that I would never binge again and I haven’t.

You can change your identity too.

Who do you want to be?

PS. If you see me, I see you too. I am here for you and I can help you overcome nutrition problems. Change isn’t easy, but it doesn’t have to be hard. Book a consult here!